I’ve been meaning to write a new blog post for a while now! Since the drawing classes at Druid camp, I spent a week in beautiful Croatia, where we stayed just round the corner of Dubrovnik in the quiet village of Zaton on the coast. Now I’m back to work in the studio (and pouring the odd pint at the Butchers Arms) everything is definitely back in full swing.

If  you fancy a stroll through the countryside near me, then pop into the Butchers Arms, Oakridge Lynch, enjoy a pint and my paintings, which are hung up to be enjoyed …and sold!

As featured in Gloucester’s newspaper ‘The Citizen’ is me painting at the Art In the City competition. My painting pictured is currently in a group exhibition in Gloucester’s Eastgate shopping centre until the 27th September. After gaining some interest during the day of painting, I was invited to produce some more paintings of Gloucester for Pilgrims shop, along the street that I was painting that day.

I am working on six more paintings of views of Gloucester, as pictured. I had been thinking about working in oils for some time, because I had some many colours collected over the years in my wooden box, and sometimes nothing quite beats the intensity and variety the medium can produce. Without hesitation, I picked up my oil painting brushes to do this series! 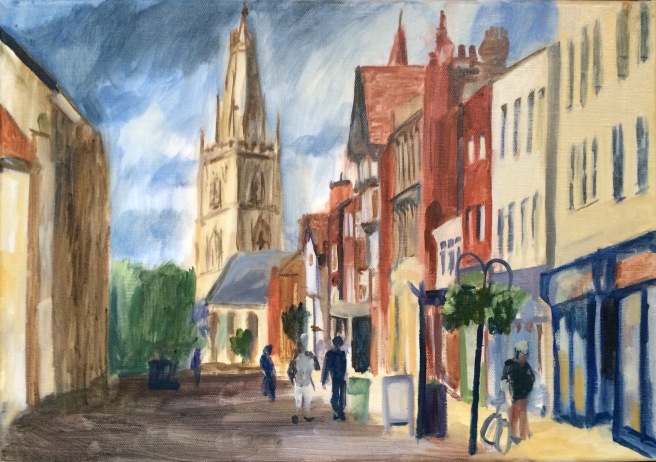 Until I squeeze out the colours and really look at the street scene in front of me, painting streets, windows and doors are actually rather colourful and there is a lot of detail. I approached all these pieces with loose paint, thin layers as well as blobs and daubs. 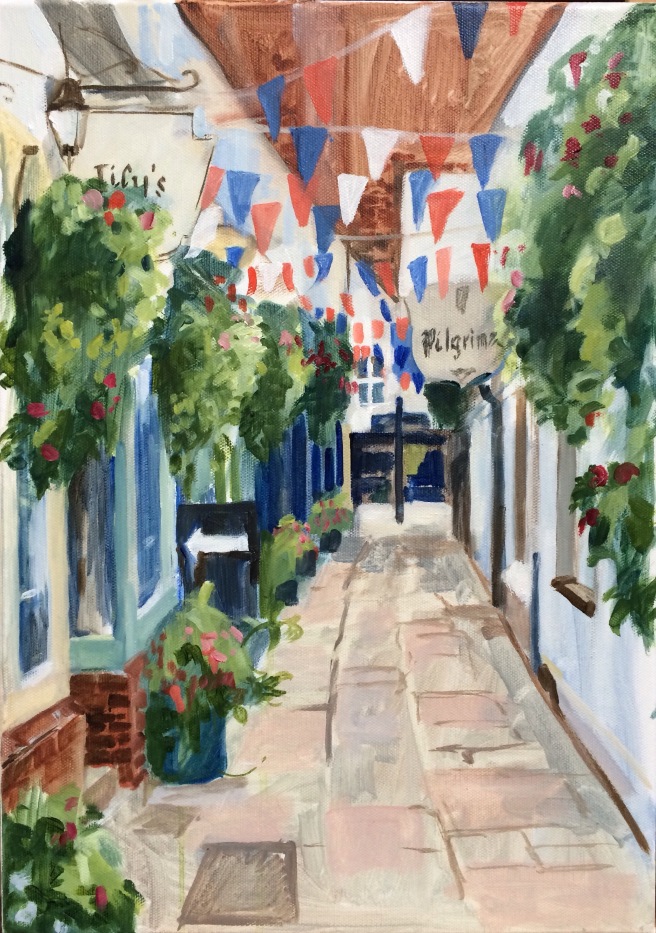 Seeing a statue along one of the streets of a horse and rider inspired me to paint it as a contrast to the other views of narrow alleys and streets. I love painting the shape and form of horses, and the light on the statue was particularly good to describe its three dimensional feel in paint. For this one, I’ll be introducing some more subtle colours and emphasise the background for some depth. In the meantime, keep an eye on this space as I finish the paintings and get them hung in Gloucester!